Back to page
Edit

- Sonya when asked about why she's so alert, Episode 01

Sonya (ソーニャ Sōnya) is one of the protagonists in Kill Me Baby. She is a foreign assassin who acts pretty cold most of the times, and can usually be found with her classmate Yasuna who she finds annoying, constantly beating her up when she goes beyond the line. 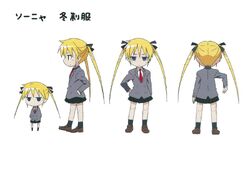 Sonya is a high school girl. She has long bangs and long sunny blonde hair reaching to the end of her hips tied into twintails with thick black ribbons.

She has blueish-violet eyes and wears the default school uniform. She wears blackish-grey ankle socks and tassel loafers. She sometimes wears a short-sleeved white button dress shirt without the blazer.

Sonya is a foreign trained assassin attending school as a regular girl. As she constantly takes on assassin work she is constantly alert, attacking Yasuna when she takes her by surprise or tries to play jokes on her. Despite her tough composure, she is scared of insects and hardly believes the supernatural. She seems to have a habit of turning normally inoffensive things into weapons, specially in the manga.